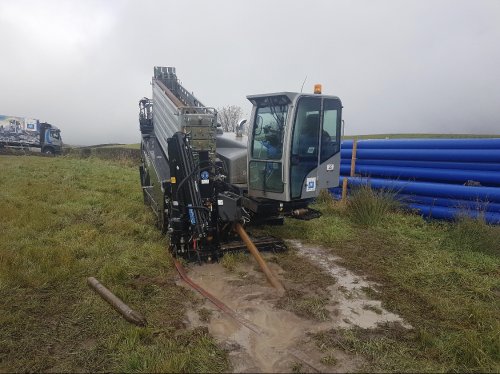 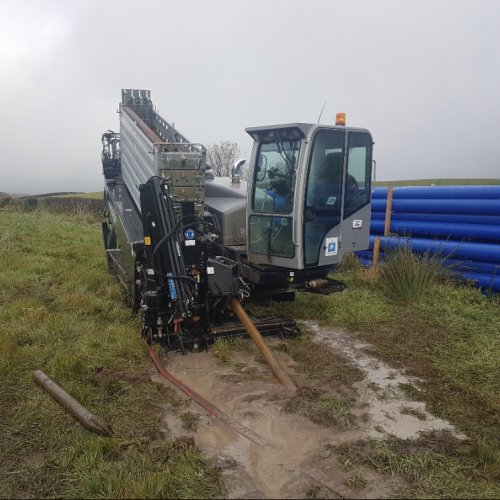 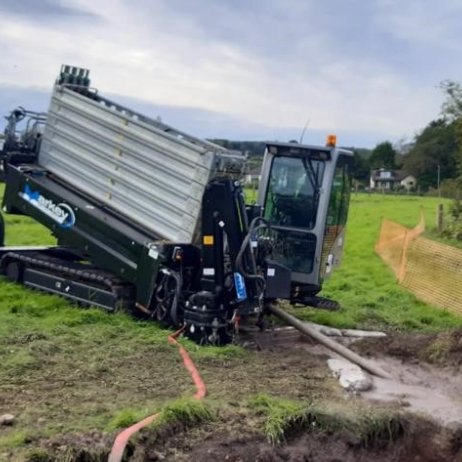 It’s not known as the King of Rocks for nothing, so when an underwater crossing to install a new water main meant drilling through hard rocks, the UK’s only GRUNDORILL 18ACS was called in to tackle the job.

Markey Drilling Ltd based in Newry, Northern Ireland, works throughout the UK and Ireland on No-Dig and trenchless construction jobs. The company has been working on Scottish Water projects for a number of years and was appointed by a sub-contractor to Scottish Water Horizons, to carry out this trenchless project in Scotland.

The water utility supplier is currently working for a building contractor on a project to instal a three-mile network upgrade to support the building of circa 2500 new homes in Barrhead; to the South West of Glasgow. One particular section of the new infrastructure provided the biggest challenge of the project to date and that was to tunnel under a watercourse and through a large granite shelf to install a new water main. The geology of the area required a specialist drilling solution that would work effectively and efficiently through the notoriously hard material.

Sean Markey, Managing Director of Markey Drilling, has used his TRACTO-TECHNIK directional drilling machine on many difficult rock drilling jobs and knew it was the perfect machine to tackle the granite shelf under the river. It did so with ease and accuracy.

“The GRUNDODRILL 18ACS is an amazing piece of kit and thanks to its compact footprint it enables us to undertake large, difficult jobs without disrupting the local environment. This water course crossing for Scottish Water Horizons had a very tight window to set up a rock drilling site. The team at Markey Drilling set up the machine on one side of the river and drilled the pilot bore across to the exit pit at the other side in 3 days.

The site was situated on a narrow road which had to remain open to traffic throughout due to a high school in the area. The compact machine footprint mean we could enable this to happen. We went through various types of rock on our descent down to the calculated maximum depth before we came across the granite shelf underneath the river. The process slowed down due to the strength of the rock but our GRUNDORILL 18ACS (King of Rock) just kept on powering through.”

The final product pipe to be installed was 280mm but required a hole diameter of 400mm in order to cut through the granite shelf and cope with the changing formations on either side. The excellent stability and user-friendly controls ensured that this task was efficiently completed. Owning the machine, according to

Sean, helps win these difficult contracts as they can offer a productive service for all lengths and sizes of directional drilling works - even in difficult site conditions.

The machine is about to head off to Scotland once more to complete four more crossings for Scottish Water in an area north of Ayrshire that has sensitive rock conditions. These crossings will facilitate trunk water mains to a rural Scottish village